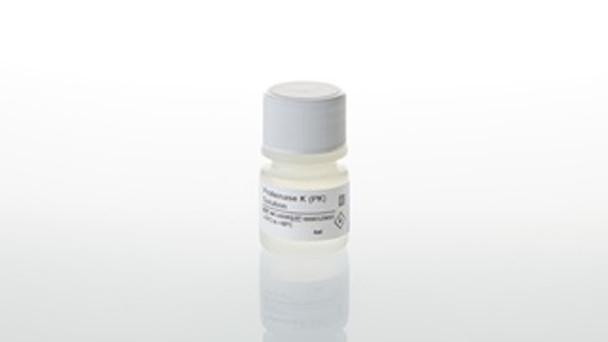 Recombinant Proteinase K in PCR Grade is a universal tool for the preparation of nucleic acid templates. Proteinase K, originally isolated from the fungus Tritirachium album, is a recombinant enzyme expressed in Pichia pastoris. It is a highly active serine endopeptidase related to subtilisin that does not exhibit any pronounced cleavage specificity.

Therefore, recombinant, PCR grade proteinase K is a universal tool for template preparation. The amino acid sequence and molecular structure of the recombinant enzyme and the native protease are identical. However, the recombinant proteinase K production process guarantees an enzyme of extraordinary reliability and purity that meets all the requirements of diagnostic manufacturers.

Particular emphasis has been placed on the low DNA content of the enzyme preparation, which makes the recombinant, PCR-grade Proteinase K ideal for isolating PCR and RT-PCR templates.

MSRP:
Now: $390
Was:
Overview Taq DNA Polymerase is the robust standard enzyme for the amplification of DNA fragments up to 3 kb in PCR. Obtain consistent results.Rely on the robust reaction...

MSRP:
Now: $225
Was:
Ready to Use Solution of Deoxynucleotide Triphosphates Highly pure (>99% triphosphate) 10mM each nucleotide in water Reduce pipetting steps by adding nucleotides as a mix Simplify your reactions...

MSRP:
Now: $130 - $178
Was:
Nucleic acid extraction (NAE) plays a vital role in molecular biology as the main step for many downstream applications. Many modifications have been made to the original 1869 method. Modern...