The bond between biotin and streptavidin or avidin is one of the strongest known non-covalent biological interactions. The (strept)avidin-biotin interaction has been widely used in biological research and biotechnology for decades.

AviTag can be easily added genetically to the N-terminus, C-terminus or in exposed loops of a target protein. We describe here procedures for AviTag insertion by inverse PCR, purification of BirA fused with glutathione-S-transferase (GST-BirA) from E. coli, BirA biotinylation of purified protein, and gel shift analysis by SDS-PAGE to determine the to quantify the extent of biotinylation.

Biotin is a cofactor for carboxylase enzymes, present in all living organisms (1). Streptavidin binds to biotin with a Kd of 4 × 10−14 M (2). Streptavidin-biotin binding is fast, specific and can still occur under conditions where most other proteins are denatured, such as high temperatures or 6 M guanidinium hydrochloride or 1% sodium dodecyl sulfate (SDS) (3).

A breakthrough for using biotin for protein modification was to harness the cell's natural machinery for biotin conjugation, using the E. coli enzyme BirA to achieve precise biotin modification (4).

The natural substrate of BirA is the Biotin Carboxyl Carrier Protein (BCCP), which requires fusion of at least 75 residues to the target protein (4). However, phage display selection allowed the development of the AviTag (also known as the Acceptor Peptide, AP), which is superior to BCCP as a BirA substrate, but is only 15 amino acids in length, so it elongates range of protein sites amenable to site-specific enzymatic biotinylation. 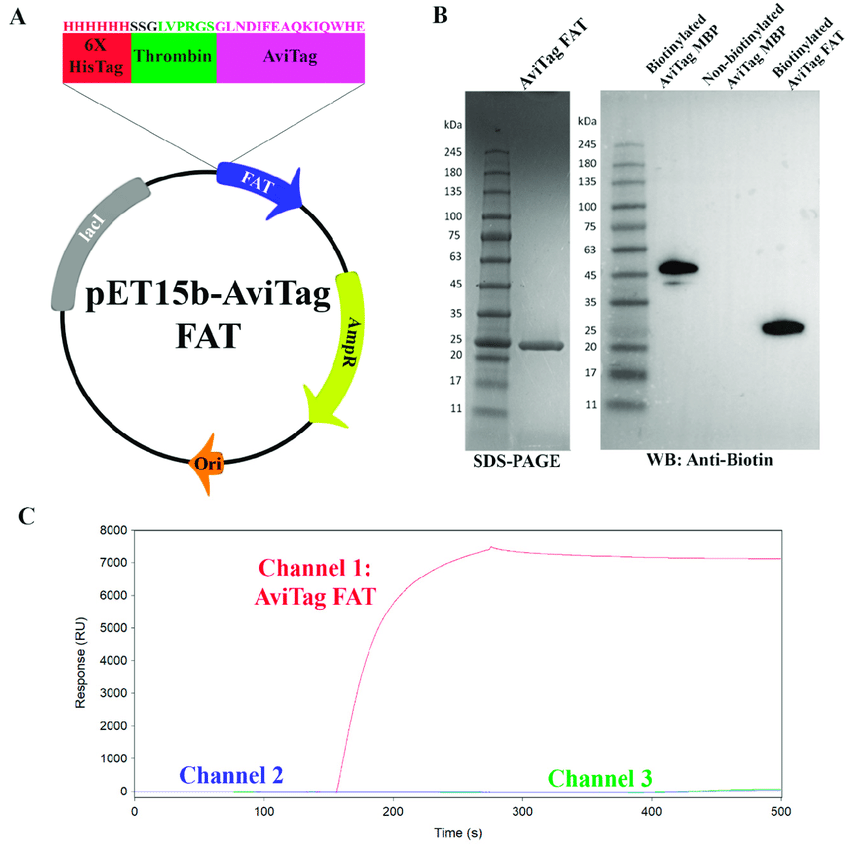 More recent work has shown that BirA can specifically biotinylate such substrate peptides in the cytosol (6), the secretory pathway and at the cell surface in mammalian and invertebrate systems (7,8,9,10). A detailed protocol for labeling with BirA on mammalian cell surface for fluorescent imaging has recently been published (11).

Tetramerization - enhancing the avidity of ligand binding. For example, MHC class I tetramerized by streptavidin allowed stable binding to the T cell receptor, thus allowing monitoring of the immune response and isolation of antipathogen or anticancer T cells (12).

Bridging – for nanoassembly, streptavidin is often used as a bridge between a biotinylated protein and another biotinylated molecule, such as DNA, sugars, lipids or small molecule drugs.

Immobilization - Provides a precise fixation that is stable over time, for a wide range of pH values ​​and for strength. BirA-biotinylated proteins are commonly used for capture on chromatography columns, chips (e.g., for surface plasmon resonance or next-generation sequencing) (14), atomic force microscope tips, or nanoparticles (e.g., quantum dots or magnetic particles).

Sensitive detection - an in vitro biotinylated protein can be added to cells and then recognized with high affinity by streptavidin conjugates (17). The use of monovalent streptavidin facilitates efficient measurement of the absolute number of biotin binding sites on cells.

An important advance in BirA labeling is its use for electron microscopy (18). Biotin ligase from E. coli or other species can also ligate to a peptide-tag biotin analogs, including desthiobiotin for reversible streptavidin binding (19), or analogs containing functional groups for bio-orthogonal reaction: keto (20), azido and alkyne groups ( 21).

However, only minor changes in the structure of biotin could be tolerated by biotin ligase and thus the cognate ligase LplA has been shown to be more suitable for direct uptake of fluorophores (22).

Engineering of streptavidin is important in expanding the utility of BirA labeling; in particular, controlled valence variants (e.g., monovalent streptavidin, mSA), allowing precise control over the assembly of biotin conjugates (11,23). In addition, we generated a streptavidin variant with a 10-fold lower off-rate for biotin and improved thermal stability (traptavidin) (24,25).

New applications of BirA have been for labeling specific protein populations – by targeting BirA to a specific chromatin-associated protein, certain AviTag-linked nucleosome populations were biotinylated (26). By targeting BirA to one synaptic membrane, AviTag proteins on the opposite synaptic membrane were biotinylated, allowing imaging of specific protein-protein interactions at synapses (27).

By expressing a BirA substrate peptide on a nuclear envelope protein and BirA in specific tissues of Arabidopsis thaliana, Caenorhabditis elegans or Drosophila melanogaster, nuclei from specific cell types could be isolated by streptavidin pull-down (28,29).

Also, the use of enzymes to achieve promiscuous biotinylation (either a BirA mutant or a peroxidase) has allowed the labeling of unlabeled proteins in certain cellular regions or compartments.