Significant innovation in synthesizing DNA is required to close this read-write gap. To do this, new methods must be developed to address old problems that hinder the scalability of DNA synthesis. For example, the traditional synthesis of gene length DNA constructs begins with the production of individual oligonucleotides (oligos), followed by assembly into longer length constructs.

Producing hundreds of thousands of oligonucleotides in parallel (several orders of magnitude higher than current methods) is necessary to increase gene assembly throughput. Furthermore, methods to improve reliability should be used to overcome inherent errors that occur during the synthesis and assembly phases of oligonucleotides. Advances in these areas will allow DNA synthesis to achieve Moore's law, such as the exponential growth seen in DNA sequencing. 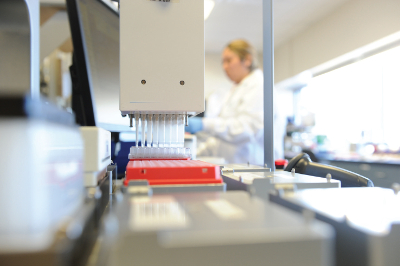 Traditional solutions to scale up DNA synthesis capacity involve linear addition of equipment and labor. In the long run, however, this solution is expensive. Other more promising options include microfluidics (miniaturization to encourage volume reductions) and multiplexing (building many things at once). Gen9's BioFab platform (Cambridge, Mass.) uses multiple technologies to build a highly scalable manufacturing process for synthetic DNA (see Figure 1).

The BioFab platform is the industry's first industrialized chip-based production technology for gene synthesis and assembly. The process begins with an ordering portal that allows scientists to easily and efficiently upload and design multiple DNA sequences at once. Sophisticated design algorithms then decompose each DNA construct into oligonucleotide-length fragments, creating optimal conditions for synthesis.

Hundreds of thousands of oligos are then chemically synthesized on high-density microarray chips. Ultimately, longer DNA constructs are assembled from these oligos using a high throughput assembly process. Given the number of oligos, fragments and constructs processed with the platform, it is essential to have an informatics infrastructure for scaling gene synthesis.

The BioFab execution system intelligently automates and guides DNA synthesis, enabling longer and more complicated sequences, and coupled with cloud-based tools that enable data mining and metric tracking from DNA design to manufacturing to shipping. In addition to the computer systems, unique error correction strategies are used during the assembly process for efficient, rapid construction of DNA, up to 10,000 base pairs in length. Finally, next-generation sequencing confirms the accuracy of the final synthetic DNA construct.

Early studies show that 50 individual DNA synthesis reactions can be multiplexed in a single well (Figure 2), and this is predicted to scale up DNA production, leading to the ability to synthesize 1 billion base pairs of DNA - the current annual global demand for DNA - in just one month. In addition, the increased capacity of the platform will reduce costs by reducing reagent waste and maximizing DNA assembly. 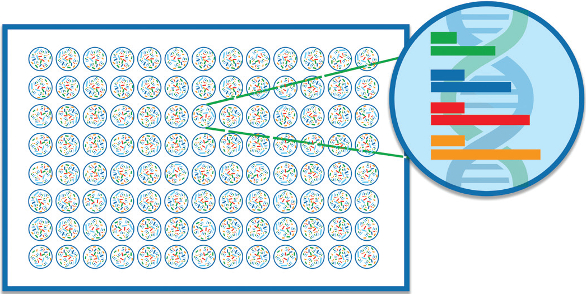 The ability to synthesize billions of DNA base pairs will drive a number of applications. For example, researchers are already investigating the possibility of using DNA as a storage medium. DNA is one of the oldest and most robust methods of information storage in the world. Recent experiments show that it can be used to house multiple types of data (such as text, photos, and music). However, unlike digital storage, DNA can survive for tens of thousands of years with a minimal physical footprint and low energy consumption. At a time when more information content is being produced than ever before, DNA data storage is an attractive alternative.

The use of DNA for information storage has been demonstrated by one of Gen9's founders, George Church, who recently encoded a book in DNA. He showed that in a space smaller than a USB stick, 70 billion unique books can be encoded. The technology to store information in the form of DNA is mainly limited by synthesis capacity and cost; multiplexed DNA synthesis can help remove these barriers.