cDNA cloning is one of the fundamental technologies in molecular biology, and most of our knowledge about transcripts and proteins is derived from the ability to prepare cDNA copies from RNA and to clone them into cDNA libraries. Starting with the discovery of reverse transcriptases, different protocols for cDNA library construction have been developed over time. Improvements in library preparation have been instrumental to gene discovery and the creation of large genomic resources. Recent discoveries of new classes of RNA and transcripts expressed at very low levels demand new cDNA cloning approaches to make such RNAs available for functional analysis. Although it is beyond the scope of this article to review all the technical developments of the past 30 years, key steps in cDNA library preparation are addressed to highlight general principles of cDNA cloning (Fig. 1) and to give an overview on the current status of cDNA cloning and future directions. 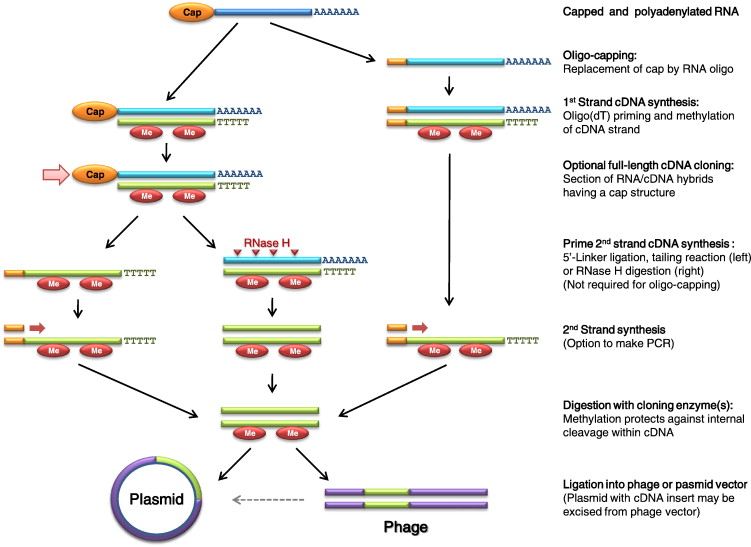 cDNA library preparation has mostly focused on cloning of mRNAs, for which generally oligo(dT) primers (dT12–18) are used to initiate cDNA synthesis from poly(A) tails at the 3′ end. Although posttranscriptional addition of poly(A) tails is restricted to RNA polymerase II-derived mRNA transcripts, oligo(dT) priming can also occur at internal A-rich sequences, including RNA polymerase III-transcribed Alu repeats [8]. It has been estimated that some 10 to 15% of the cDNA clones within oligo(dT)-primed libraries could have truncated 3′ ends due to misannealing of oligo(dT) primers [9]; this is particularly a problem for cDNAs derived from very long messages [10], [11]. Alternatively random primers of 6 to 9 nucleotides can be used to drive reverse transcription reactions [12], [13]. While this is sometimes useful to reach the 5′ end of very long transcripts and frequently used for analytical purposes, this approach does not allow full-length cDNA cloning. For later digestion and directional cloning of cDNAs, recognition sites for restriction endonucleases can be introduced at the 3′ end of cDNA using bifunctional primers comprising oligo(dT) and linker regions [14]. During first-strand synthesis cDNA can be further protected against digestion by methylation-sensitive enzymes by introducing 5-methylcytosine to create hemimethylated DNA