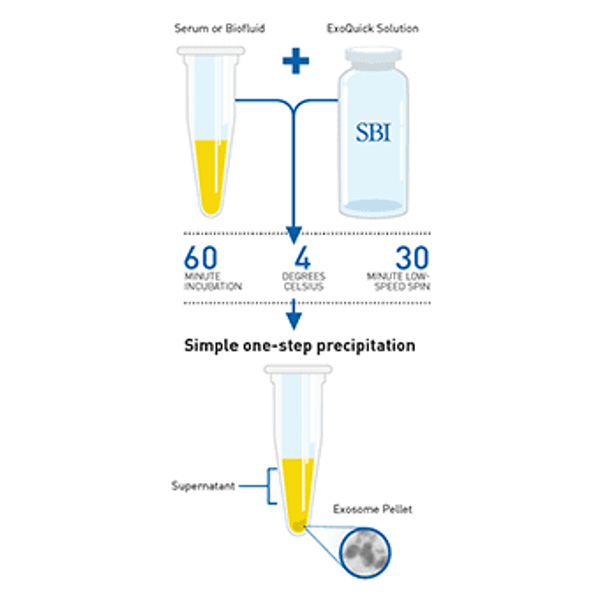 MSRP:
Now: $745
Was:
ExoQuick PLUS Clean and efficient exosome isolation from serum, plasma, and ascites fluid—cleaner and faster than ultracentrifugation, ideal for sensitive applications.

MSRP:
Now: $712
Was:
ExoQuick® Exosome Isolation and RNA Purification Kit (for Serum & Plasma) Isolate exosomes and then purify exosomal RNAs for biomarker discovery and more (for serum,plasma, or ascites fluid ...

MSRP:
Now: $745
Was:
ExoQuick PLUS Clean and efficient exosome isolation from serum, plasma, and ascites fluid—cleaner and faster than ultracentrifugation, ideal for sensitive applications...

MSRP:
Now: $1,084
Was:
ExoQuick-CG     ExoQuick is now ready for purifying exosomes for clinical use with a version of ExoQuick manufactured in compliance with 21 CFR 820. 21 CFR 820 compliant All...

MSRP:
Now: $783
Was:
Get easy EV isolation with ExoQuick-TC and total EV RNA purification with EVeryRNA in one convenient kit—high yields and high-quality drive reliable insight. Get high-yield exoRNA isolation...

MSRP:
Now: $745
Was:
ExoQuick-TC PLUS Clean and efficient exosome isolation from cell culture media and other biofluids—cleaner and faster than ultracentrifugation, ideal for sensitive applications. ...

MSRP:
Now: $519
Was:
Overview Efficient RNA extraction from isolated exosomes When you want to extract RNA from already isolated exosomes, choose the ExoQuick Exosome RNA Column Purification Kit. With only...

MSRP:
Now: $340 - $1,505
Was:
Hemoglobin Removal and Capture Has a high degree of specificity for hemoglobin, without cross-reacting with other proteins or analytes Suitable for Hemolyzed serum/plasma Whole Blood,...

MSRP:
Now: $335
Was:
Vacutainer A vacutainer blood collection tube is a sterile glass or plastic test tube with a colored rubber stopper creating a vacuum seal inside of the tube, facilitating the drawing of a...

Peptone A FROM MEAT

MSRP:
Now: $340
Was:
Anti-Mouse Hemoglobin | 100-CHM-90A-Z Small volumes of anti-Hemoglobin antibody vial(s) may occasionally become entrapped in the seal of the product vial during shipment and storage. If...